’Tis the Season to Draw Oxford Commas on Starbucks Cups

I was going to write about Starbucks cups this week, but it’s not controversial enough. Instead, I bring you another rant on the Oxford comma.

Perhaps you still are unaware of the Great Oxford Comma Controversy.

Among grammar geeks, the Oxford comma divide is only overshadowed by

arguments over the dreaded semicolon. Think Capitol Hill Republicans and

Democrats. Republicans are pro-Oxford comma. Democrats believe it should

be aborted. That’s the divide here.

At this point, you may be scratching your head, saying, “What’s an Oxford

comma?” You’ve seen it; you probably even have an opinion on it. You’ve

just never heard it named before. So let’s define it:

Who the heck cares, right?

Well, in certain instances, the Oxford comma does makes a difference. Take the sentence: “I was at the show with my parents, Bill Clinton and Oprah Winfrey.”

I know, right? That would be one ugly kid!

But if you insert the Oxford comma after Clinton—which he would thoroughly enjoy, by the way—then the emphasis changes. “I was at the show with my parents, Bill Clinton, and Oprah Winfrey.” Four people, not two.

Here in the United States, however, we’re absolutely puritanical about using it. The Chicago Manual

of Style, The Elements of Style, and the U.S. Government Printing Office Style Manual all insist on using

the Oxford comma. It’s the communistic U.S. media that drops it: The Associated Press, the New York

Times, and the Economist, for example.

Personally, I’m among those who don’t care if you use it or not. I’m an Oxford comma agnostic. When

writing for the media, I don’t use it. When writing for anyone else, I generally do. The only caveat here

is that in any particular piece of writing, use it or don’t use it consistently. Don’t mix and match. Pick

a side and stick to your guns, even if you have to switch sides later. This country was founded on

the principle that I’m right and you’re wrong. Honor that principle and be consistent in the use of a

British comma that most of Britain doesn’t use.

That’s my humble opinion and I’m sticking to it. Now excuse me while I draw Christmas commas on my Starbucks cup. 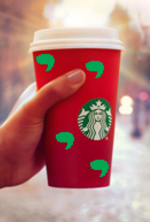 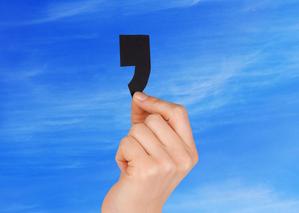