“The journey of a thousand miles begins with a single step,” ancient Chinese philosopher Lao Tzu is widely quoted as saying.

What if your first step is a 6,000-mile cross-country round trip to meet with military, veterans, and their families to put faces on the suicide epidemic?

10-day whirlwind tour of bases and veteran halls. Along the way, they met with those who

wore the uniform and their families and talked about their needs and opportunities. (Full

disclosure: the foundation is a client, though they are not paying me to write this column.)

Shelia and Summer returned on Monday energized to keep the drive alive.

“Just making those connections along the way was very uplifting,” Summer said.

Summer described the people they met on the road as “very embracing.” There will be

follow-ups, not only with those met on the road, but with people who commented on the

foundation’s Facebook posts from towns and cities along the way, and more local warriors and their families.

As reflected in its name, Warrior Research Foundation is a research organization. Its mission is to understand problems faced by our military and veterans through quantitative and qualitative analysis and find solutions to those problems. The Drive for Life campaign is an attempt to put a qualitative face on the numbers.

The numbers are staggering. One in two veterans of the Iraq and Afghanistan wars say they know a fellow service member who attempted or committed suicide, a Washington Post-Kaiser Health poll found. In addition, a recent study published in the Psychiatric Services Journal indicates a small number of studies—limited to veterans who used services provided by the Veterans Health Administration—observed a 42 to 66 percent increase in the risk of suicide between 2000 and 2007, compared with the general U.S. population. This study also found that between the years of 2000 and 2010, the female veteran suicide rate increased 40 percent.

Help is certainly needed. Thankfully, there are those willing to take the journey.

speaker, and youth motivator Michael Pritchard, who is lending his name and

energy to the project. Photographer and documentary filmmaker Steve Gatlin

filmed Michael’s discussion with Shelia and Summer, as well as other meetings

the foundation executives had around the Bay Area. Look for a Drive for Life

promotional video coming soon to a computer near you.

Shelia and Summer have completed the first step of the journey. A very big

first step. They are committed to seeing the journey through.

“If anyone asks if we’d go across the country for our veterans, we can say we

did,” Shelia told Summer on the final leg of the trip.

“We’ll go as far as we need to go to help our military, veterans, and their families,” Summer added.

To those who wore the uniform, we thank you for your service. 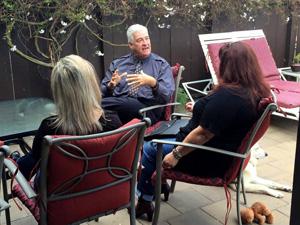 A 6,000-mile First Step to Saving Veterans from Suicide 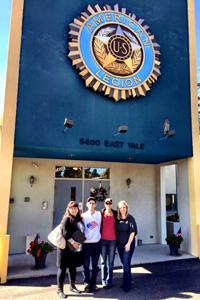