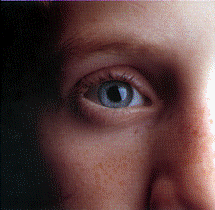 A Burning Desire to be Chosen

to the sun’s glare so blue-eyed baseball players bat better during night games than day games.

Batter’s eye is not to be confused with batting an eye, which is a Yogi Berra term for clumsy

batters who no longer see too well.

eye, which is the term for an egg yolk staring up at you before you batter it into submission

and make it part of the batter.

cooking it’s yellow, the color of the sun that makes the baseball player squint.

Which brings us to sunspots, the chosen, and the true timeline for the end of the world.

I find it hard to believe that I am among the chosen—and I know you think I’m batty too. But my extensive research has led me to that indisputable conclusion.

Unlike you brown-eyed heathens, blue-eyed people hail from a single ancestor whose genes miraculously mutated into the blue-eyed phenomena. Jewish people do not have a natural body part that distinguishes them from gentiles. Catholics are Catholics only after baptism. But the blue-eyed are distinguishable from birth. It’s the sign of the chosen. Very few are chosen, and only 8 percent of the world’s population has blue eyes.

Blue-eyed people are more successful, a Louisville University professor determined. We are the strategic thinkers of the world. When not squinting, we see the world better than you common brown-eyers. If we hadn’t come along 6,000 to 10,000 years ago, you’d still be sitting around a campfire grunting and scratching your groins.

The world’s end is supposed to remain a mystery and the sun squint was meant to keep the chosen blind to how the sun is leading the world to its catastrophic end. But in true blue-eyed fashion, we have it figured out.

Scientists are waiting for the sun’s big one—a solar flare shooting out of a sunspot so powerful it would put 135 million Americans back to the good old days without electricity.

“Water systems would fail. Food would spoil. Thousands could die. The financial cost: Up to $2 trillion, one-seventh the annual U.S. gross domestic product,” in the words of the Washington Post.

History gives us a glimpse into what is to come. The largest solar flare on record hit on September 1, 1859. Humans were Neanderthals compared to today and the only thing we had created that could be affected by the sun’s temper tantrum were telegraph lines. Several transformers burst into flames as the sun’s intensive energy burst through their wiry veins.

But today, the world relies on electricity for everything, and the catastrophic effects will be much greater, throwing the world into anarchy. GPS will be knocked out. Oil pipelines will bust. Communication satellites will fail. Heck, kids can’t even write cursive these days. How will the world communicate without iPhones?

Such a catastrophic event could happen in 2013 or 2014, scientists say. That would be the day of the rapture. Then, as the Bible foretold, there would be a period of solar calm. The calm could last up to 70 years, putting the world into a mini-ice age. So much for global warming.

And then the sun would get angry again, hitting the earth with one final salvo. But the blue-eyed people will be long gone. We will have been lifted into the sun on the day of the rapture.

Once there, we will burn for all eternity.

The moral being: As hot as we are, in the end the blue-eyed chosen more than likely are going to strike out.