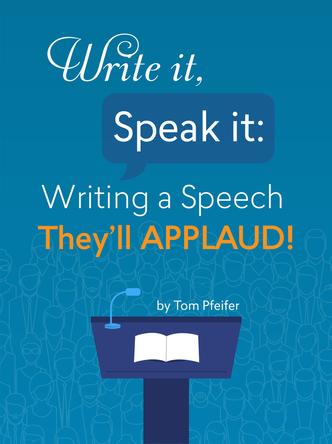 Begin with a Bang

(Editor's note: This is excerpted from Tom Pfeifer’s book, Write It, Speak It, available on Amazon.com on April 5, 2016.)

How many speeches have you heard start like this?

“Ladies and gentlemen, it’s a pleasure to be here tonight. You all look

see you with these bright lights. Isn’t the weather perfect? I’d like to

thank Norman for that wonderful introduction. I hope I can live up to it.”

I guarantee he didn’t live up to it, because my brain had already shifted to

composing my grocery list. The speaker had already broadcast to me

that he was boring.

In 2015, the attention span of humans fell to eight seconds, according

to the Statistic Brain Research Institute. That’s shorter than a goldfish,

which the institute pegged at nine seconds. It’s also down from 2000,

when humans apparently could pay attention for a full 12 seconds.

Incidentally, the Institute  didn’t say if the goldfish’s attention span

rose or fell during that time.

before their minds wander at 15 seconds. That’s longer than the

Institute gives us credit for, but it’s still not much time. You don’t want to

waste it. Once you lose your audience it’s very difficult to get them back. So you need to begin with a bang and grab their attention right away.

Craig Valentine, the 1999 Toastmasters International World Champion of Public Speaking, believes there are three effective ways to start a speech:

In a speech about telling stories, I start with telling a story. Depending on my audience and the effect I want to create, I may start with a story about four-year-olds predicting their futures, or about my first day as a newspaper intern, or even a story about my tie.

“Is Donald Trump succeeding because he embraces Toastmasters guidelines, or because he violates them?”

After a brief pause, I answered:

You also can combine elements to begin a speech. In a speech on how the journey to greatness never ends, I open with a curious statement followed by a question:

“I am great!” I loudly exclaim.

“How many of you have been told you were great?” Which I answer:

These tricks of the trade work equally well with the written word. Here’s the opening paragraph of a magazine article I wrote for a client:

That’s a mini story—with a point.

I started a blog post for another client this way:

‘“The journey of a thousand miles begins with a single step,' ancient Chinese philosopher Lao Tzu is widely quoted as saying.

“What if your first step is a 6,000-mile, cross-country round trip to meet with military, veterans, and their families to put faces on the suicide epidemic?”

That’s a quote followed by a question.

I began another blog post—and a speech to a group of business folk—by asking:

“Do you want clients who you enjoy working with—and with whom you do your best work?”

The point is to engage your audience’s brains right away.

Again, there is nothing special about speaking that demands you grab your audience immediately. It’s crucial to all communication. Joshua Conran, a senior partner with brand strategy, marketing, and advertising agency Deksia, wrote in Inc. that advertisers have only five seconds to grab their target’s attention.

Eight seconds. Fifteen seconds. Five seconds. In short, seconds count. If you want your audience to pay attention, begin with a bang, not a whimper.