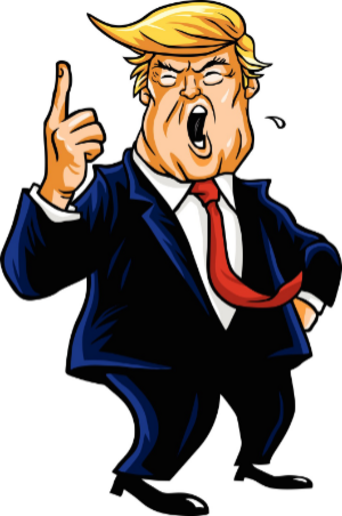 On a single day this week, the New York Times published two stories that caught my eye. One discussed face blindness, a condition in which the sufferer cannot recognize people he sees all the time, even his children. The second story referenced mindblindness, an autistic condition that makes it difficult for the afflicted to read social cues.

you wander down a blind alley. I knew you could have a

blind spot to your blind trust. I knew you could steal a

person blind while he’s being blinded by the light. But

I didn’t know about face blindness or mindblindness

before. So I went looking for other blindnesses.

There are many, but the one that trumps all is Trump

blindness, the inability to see that you are not God’s

gift and are, in fact, a pompous blowhard.

Those who suffer Trump blindness never fail, even

when they obviously do. Consider that Donald

venture when only two of the seven GOP presidential

Rick Santorum is desperate for any media attention, so

his bid to tie himself to the circus ringmaster is

is Newt. Newt is always thinking, but he rarely thinks things through. Call it think blindness.

Peeved that he didn’t get his way, Trump stomped his feet all the way to the elections bureau and changed his party registration from GOP to independent so he could preserve his right to run for president without party baggage. He is, after all, Donald Trump, and the peons love him.

Former Illinois Gov. Rod Blagojevich suffered from Trump blindness until he was cured this month by a 14-year prison sentence. Ditto the guilty plea by New York State Sen. Carl Kruger who, while not gay, lived with his apparently gay lover in a lavish mansion paid for with graft and bribery proceeds.

Happy tidings blindness broke out across this great land of ours this holiday season, at times literally. It began on Black Friday when a woman at a Walmart in a wealthy Los Angeles suburb pepper sprayed fellow shoppers so she could have a better crack at getting a discounted Xbox video game player. The story didn’t explain why there is a Walmart in a wealthy suburb.

Then, two days before Christmas, retailers hoped to rake in some last-minute Christmas cash by offering Air Jordan Retro Concords for sale. They were blindsided by the chaos it caused. As the New York Times reported:

“In Charlotte, North Carolina, shoppers smashed glass doors to get to the sneakers. In suburban Atlanta, the police made four arrests when a crowd broke down a door to get into a store before it opened. In Richmond, California, a man fired a single gunshot in the air just after a mall opened. In Louisville, officers had to stop fights that popped up among a crowd of waiting shoppers. And in a suburb of Seattle, the police used pepper spray.”

It didn’t stop there. The day after Christmas, about 200 young people made life a shopping hell at the Mall of America in Bloomington, Minnesota. It started with a fight in the food court. Soon, there were fights throughout the mall and, later outside the mall and on routes from the mall.

Twenty percent of teens aren’t sexting, either. A study in the journal Pediatrics found it closer to 1 percent. And, police involvement in sexting cases is very rare, another study found. Perhaps the lack of sexting and thoughts of sex are why only 48 percent of public schools failed the No Child Left Behind test this year, instead of the 82 percent Secretary of Education Arne Duncan predicted would fail. Call it success blindness.

But it’s blind justice Steven Hopler is after. The authorities want to take away his collection of about a dozen guns just because he’s blind as a bat. Hopler is not a man I would want to play blind man’s bluff with. But perhaps The Donald would like to play. He always wins.