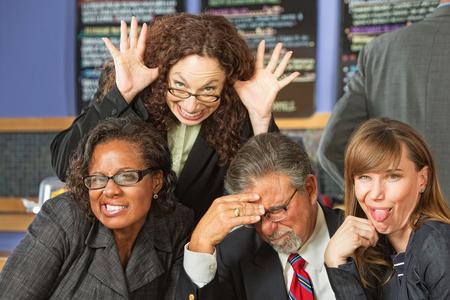 Did You Laugh This Week?

People often tell me, “You’re always so happy!” and, “I love your laugh!”

It’s true that I do love to laugh. I also surround myself with laughers.

How much did you laugh this week? Monday

was the International Day of Happiness, so

Do you want better health? Laugh. Do you

want to defuse tension? Laugh. Do you want

to be more successful? Laugh. Do you

Humor is often what people think of when

they think of laughter. Here's how the late

decrying the lack of humor in his contemporaries, described humor:

“A thing is funny when—in some way that is not actually offensive or frightening—it upsets the established order. Every joke is a tiny revolution. If you had to define humour in a single phrase, you might define it as dignity sitting on a tin-tack. Whatever destroys dignity, and brings down the mighty from their seats, preferably with a bump, is funny. And the bigger they fall, the bigger the joke. It would be better fun to throw a custard pie at a bishop than at a curate.”

One wonders how Orwell, who famously wrote the book 1984, would find humor in today’s American society.

But laughter is not only the consequence of a good joke. You’ve no doubt heard the phrase, “Laughter is the best medicine.” Some medical centers have taken it to heart. The Cancer Treatment Centers of America® (CTCA), for example, has Laughter Clubs at its facilities.

"Laughter Club is based not on humor or jokes, but rather on laughter as a physical exercise," the CTCA website states. "One group laughter exercise involves patients standing in a circle, with the leader in the middle. Patients put their fingertips on their cheekbones, chest, or lower abdomen and make “ha ha” or “hee hee” sounds until they feel vibrations through their bodies. Dr. (Katherine) Puckett (CTCA Division of Mind-Body Medicine chief) says that, during these exercises, it is hard for people not to join in because laughter is so contagious."

Psychologist Jerry Deffenbacher, PhD, uses humor as one of his tools to manage anger in his patients. This cognitive restructuring technique has the patient rethink their situation in a silly or humorous way. As Ryan Martin Ph.D., noted in a Psychology Today article, it’s impossible to laugh and be angry at the same time.

As Stein noted, laughter releases oxytocin in the brains of the recipients, which “facilitates social bonding, increases trust, and quickens self-disclosure,” and dopamine, “which aids in memory and information processing.”

So go ahead and laugh. You’ll relieve stress, increase productivity, have better health, and win friends. Add singing and dancing to the mix and you’ll be living my motto: Today is yet another good day to dance, sing, and laugh.