I fear for my country.

I’m old enough to say that now. I remember when my mother used to say

it. I would turn to her and say, “The world has always been a mess.”

This is my now.

aware of the world around me just as John F. Kennedy was assassinated.

without bras. National Guardsmen gunned down unarmed students at Kent

That was the news. But I didn’t need the news to tell me times were bad. A few miles from my home, race riots flared in the black neighborhood. Less than a mile away some crackers burned down a medical doctor’s home just because he had the audacity to think a black family would be welcome in our white neighborhood. The tracks are thataway, buddy, and you belong on the other side.

My classmates and I practiced crouching under our wooden desks on knees and elbows with our fingers firmly clasped behind our heads. This was to protect us if the Russkies were to launch a nuclear attack.

A Jewish schoolmate confided in me that she felt discriminated against in our Christian-dominated high school. My Columbian friends came to visit and my grandfather called them a derogatory term for someone on the other side of Trump’s wall.

Things seemingly got better.  A series of 1960s Supreme Court cases cleared the way for better race relations. In 1967, the court decided state laws prohibiting inter-racial marriage were unconstitutional. And, in 1968, it held that federal law bars all racial discrimination in the public or private sale or rental of property. A majority of both political parties in the House and Senate voted to approve the Civil Rights Act and it was signed by a Southern Democrat president.

The military draft ended the year my number was drawn. I didn’t look to see how close I had come. The Vietnam War ended a year later. We had relative peace and prosperity for many years. More people of color attended college and offices throughout the country became integrated in both race and gender.

Eight years ago we elected our first black president. Love him or hate him, it was a historic moment. We had moved beyond color. Or so it seemed.

More recently, we also seemingly had moved beyond the politics of obstruction with the selection of Paul Ryan as Speaker of the House. Again, love him or hate him, but he is willing and able to stand up to the fringes of his party.

Unfortunately, we have two presidential candidates who represent the worst of America. My friends on the right are correct when they call Hillary Clinton incompetent and a compulsive liar who is in bed with Wall Street while pretending to side with the little people.  My friends on the left are correct when they call Donald Trump unstable, a bigot, and a sociopathic liar. It wouldn’t be the first time I held my nose and voted for the lesser of two evils, but I can’t tell who that is in this race. They both are completely wrong for my country.

Black people are dying at the hands of police officers at a greater rate than their share of the population. Police officers are killed for the simple reason that they wear the badge. We might as well burn down the black doctor’s house and spit on our soldiers.

And, there is no leader on the horizon with the credibility and capacity to bring back the sanity. Neither evil is less.

So I find myself in my mother’s place. I fear for my country. This is my now. I do have faith my now will be my then again. But I question how many lives will be destroyed before we get there. 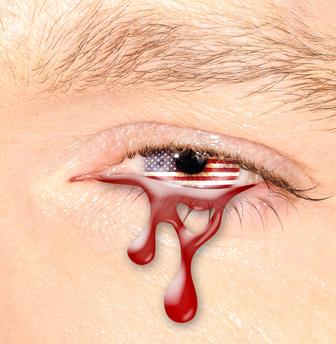 I Fear for My Country. This is My Now.