TBT: It’s the sauce that makes the message tasty

We were at lunch, and my friend Ms. B was describing her nonprofit’s latest communications failure. I had dipped my spring roll into the bowl of sweet sauce and was trying not to drip the red sauce onto my green tie.

They are not unintelligent people, but unlike Ms. B, they do not have a PhD in

administrative healthcare, either. They also do not work in government

relations, which requires Ms. B to prepare detailed position papers about

healthcare that only those with a healthcare background—or who legislate

on health issues—could comprehend. Ms. B prepares dry material, like a

spring roll without the sweet sauce.

digest her reports. And Ms. B is not trained to translate her research into a

language those stakeholders could absorb.

The organization has a communications team. But they are not to be involved in this endeavor.

Say what? The sweet sauce is tipping over! Quick, get a napkin! Too late. Ms. B’s nonprofit just poured sauce on its tie.

Communicators are the sauce that makes the message tasty. They are effective on the spring roll. They’re wasted on the tie. 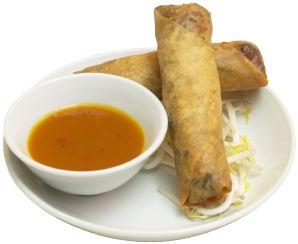