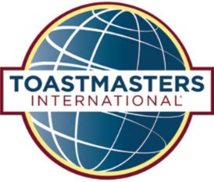 I didn’t even place.

To get to the finals, I had to win at the club, area, and division levels. I actually

didn’t win at the club level. I didn’t lose either. I just had no competition. But I did

win the area and division contests. I was a champ! In the two weeks between the

division contest and the finals at the district level, 2013 Humorous Speech

Champion Arti Kumari coached me on  staging techniques. I presented my speech

and received feedback on it at five different Toastmasters clubs. I rehearsed every day.

Three and half years ago you would not have found me on stage giving a coherent speech. My professional career included being a speechwriter, but I didn’t deliver them. I joined Toastmasters International in March of 2012 to overcome America’s No. 1 fear—public speaking before launching my entrepreneurial career. After losing in my first club-level speech competition that first year, fellow Toastmaster Cris Birch told me: “You write a good speech. Now you have to learn how to deliver one.”

Public speaking is an art and a craft, much like writing or any other creative process. You get better by doing. You lose your edge when you don’t. Most Toastmasters clubs near me meet once or twice a month for 60 to 90 minutes. The first club I joined meets every week for two hours. I didn’t plan it that way. But I needed to find a club close to home that met on Saturdays. GUTS (Get Up to Speak) fit that bill.

When I was called up to do my first one- to two-minute impromptu speech called Table Topics, I said a few words, mumbled, “My brain just froze,” and stumbled to my seat, my entire body shaking and my head pulsating as if it was about to explode. I think I managed to get through my first prepared speech OK, but that’s because I read it. The first time I delivered a prepared speech without notes, I mumbled, “My brain just froze” a minute or two into the speech. But I stood my ground and managed to finish. I sat down, my body shaking and my head pulsating.

Why do I keep going back? Because of the evaluations. Every speech is evaluated by a fellow Toastmaster. You’re told what went well and given suggestions “to make it even better.” Why do I keep going back? Because polished speakers like Distinguished Toastmaster Paul White told me of their first horrifying experiences. Why did I join two other clubs? Because I’m a glutton for punishment. Failure is an option. But it’s OK to fail at Toastmasters. I now give presentations to outside groups. I try them out at Toastmasters first. The feedback always makes them better. I’d rather fail at Toastmasters than on the road.

Before this contest season, I had never placed higher than second place at the club level. I managed to compete in an area contest last year—but only because the first-place GUTS winner couldn’t make it. I came in second.

This year I made it to the finals after accepting two first-place trophies. I failed to achieve glory at district, but I didn’t fail to become a more polished speaker. I’ve learned how to deliver a good speech, Cris. Thank you and all my fellow Toastmasters for your support along the way. I’m already writing a speech for the next competition. I may not win. But I most certainly will not lose.