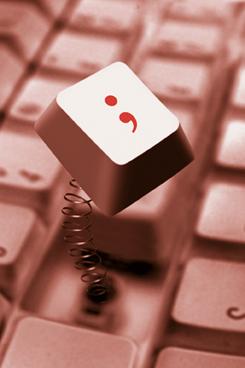 “Here is a lesson in creative writing. First rule: Do not use semicolons. They are transvestite hermaphrodites representing absolutely nothing. All they do is show you’ve been to college.”

With all due respect to transvestite hermaphrodites, I like semicolons. How else is a

writer to wink at his friends? ; )

But I realize I’m in the minority. Some of you detest emoticons. Others simply detest

semicolons. Here’s what a friend—who not only has been to college but now teaches

university-level journalistic writing—has to say about the eyes in a winky emoticon:

“Semicolons have got to be the most misused piece of punctuation. I like to joke

there ought to be a semicolon license. People would only get a license if they could

pass a test to prove they know how and when to properly use them.  Of course,

punctuating without a license or arrested for murdering the English language.

I took to Twitter to see what the masses are saying about the semicolon.

High-schooler @nicolekiluk is more mature than she knows:

“maturity to me, is admitting to myself that I will never be able to use a semicolon with confidence,” she tweeted.

Although one hopes @nicolekiluk will capitalize and use commas with confidence someday, her teen attitude on semicolons could put her on the verge of collecting Social Security. I base that on what @boothair tweeted:

“I'm almost 60, and I still; don't know where a damn semicolon goes in a sentence.”

So, for @nicolekiluk, @boothair, and everyone in-between, let’s review semicolon etiquette. There are basically three uses:

And that’s it. So use them sparingly, but do use them. For, as @BigDaveSmith tweeted, “There's something generally arousing about the proper use of a semicolon.”