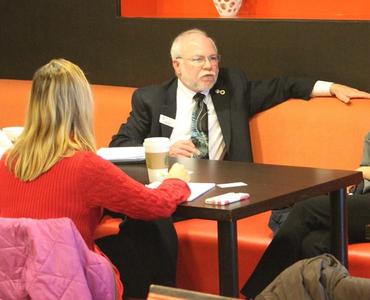 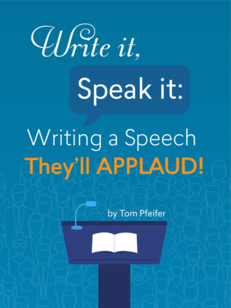 I was at a chamber mixer last week. Erin, the daughter of one of my fellow entrepreneurs, was there too.

“I don’t think I’ve ever met an author before,” she said.

To which I rather stupidly and haughtily replied, “Now you have.”

I didn’t mean to sound haughty. I just was taken aback that Erin

did not know any authors. I know lots of authors. In fact, in my

circle I’m rather late to the game. No big deal, really. It’s been a

lifelong dream to publish a book. Now I have, as many have

before me. End of story.

But it’s not. Because, I’ve found, much of the world runs in Erin’s

circles, not mine. They’ve never met an author before. To many

people, I’m unique to their circle.

In the few short weeks since my book was published, I’m no longer introduced as Tom. I’m introduced as Tom the Author. At business networking meetings and at Toastmasters gatherings, Author is always appended to my name. As if I’m a new person. As if the old Tom doesn’t exist anymore, and in his place is this shiny new being.

I will be presenting an educational session at a Toastmasters International district conference next Saturday because I am a published author. Thirty years of writing for newspapers, politicians, associations, and businesses, years of writing a blog and years ago writing a book four times as thick didn’t gain me that privilege. The previous book hasn’t been published. It didn’t make me Tom the Author. Presenting the same workshop several times before the book was published may have gotten my foot in the door, but publishing a book threw the door wide open.

Presenting at the conference will be the same old Tom. I may say something stupid and be unintentionally haughty. I will intentionally crack some jokes. More importantly, I will share lessons learned from more than 30 years of being a professional writer that my audience can use to improve their communication skills. That’s my reason for being there.

Oh, and I’ll have some books to sell. Because while I am the same old Tom, I now have Author appended to my name. I need to take advantage before the novelty wears off. The old Tom approves.


Tom Pfeifer is the managing partner and chief strategist for Consistent Voice Communications. Reach him at Tom@YourConsistentVoice.com.

Write It, Speak It: Writing a Speech They’ll APPLAUD! is available on Kindle or paperback.