The Genesis of Noah’s Copyright Law 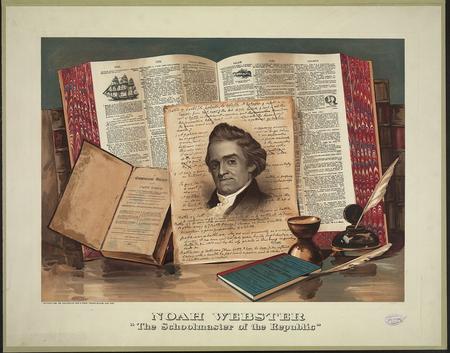 At least one biographer refers to Webster as The

because Webster’s home state refused to send him

to the Constitutional Convention as a delegate. He

true he, his father, and his brothers rushed to the

Burgoyne had been captured before they arrived.

Instead, Webster waged war on British culture and

his books and dissertations.

Webster was born in 1758 and came to age during

the Revolution. His family was indisputably American.

His mother’s great-great-grandfather landed in New

England aboard the Mayflower. Webster’s great-great-

grandfather, John Webster, had journeyed from

Massachusetts to help found the Connecticut Colony and later served as governor. It was in Connecticut that Webster was born, lived, raised his family, and died at age 84, with stints in New York City to run America’s first daily newspaper, and Amherst, Massachusetts, where he founded Amherst College.

Because of his pedigree Puritan and farmer background, Webster believed Americans should have their own culture, right down to English spellings. No longer would “color” or “behavior” be spelled with a British “u,” or “public” or “music” spelled with an unnecessary “k,” as the British lexicographer Samuel Johnson had spelled them in his landmark 1755 dictionary.

But those changes were not reflected in his first book, a speller, which was a textbook to be used in schools that presented words and definitions and was published in 1783. Webster wouldn’t try out American spellings for several more years. The speller is important, however, because Webster traveled the entire United States—all 13 of them—to promote it. While on the road, he also argued for copyright protection from each state legislature. Webster had previously approached Benjamin Franklin and George Washington for federal support. But, at the time, the United States was operating under the states-dominated Articles of Confederation and there were no provisions for a federal copyright law. So, Webster went state to state.

Not surprisingly, Connecticut was the first state to grant protection. By the time the U.S. Constitution was ratified, 12 of the 13 states had enacted copyright legislation. Delaware was the lone holdout.

Although he wasn’t a delegate, Webster urged his friends at the Constitutional Convention to include copywrite protection in the Constitution. By then, his friends included not only Franklin and Washington, but also Thomas Jefferson and James Madison, the latter regarded as the Father of the Constitution. He was successful. Article I Section 8. Clause 8—the Patent and Copyright Clause of the Constitution, states: [The Congress shall have power] “To promote the progress of science and useful arts, by securing for limited times to authors and inventors the exclusive right to their respective writings and discoveries.”

A year after the Constitution’s ratification in 1789, the U.S. Congress passed its first copyright law. It protected works of arts for 14 years.

In 1831, the law underwent its first major reform. Webster was now in his 70s but still actively lobbied for several provisions. As a result, the new law protected creators of works of art for 28 years, with an option to renew for another 14. That law lasted largely untouched until 1909.

Webster’s speller, published before copyright laws went into effect, sold an estimated 100 million copies by the early 1900s. But Webster acquired very little money from it, even with its grandiose title suggested by a Yale professor: A Grammatical Institute of the English Language (but best known for the color of its binding as the Blue-Backed Speller). His dictionary and subsequent books and publications, published after 1790, did enrich him.

Webster was a patriot and visionary, but he was also a capitalist. Those qualities combined to bring us our distinctly American language and copyright laws.

"About Us." Merriam-Webster. Accessed January 25, 2018. https://www.merriam-webster.com/about-us/spelling-reform.

"Noah Webster and the Dream of a Common Language." ConnecticutHistoryorg. Accessed January 25, 2018. https://connecticuthistory.org/noah-webster-and-the-dream-of-a-common-language/.