Vote for the We Party! 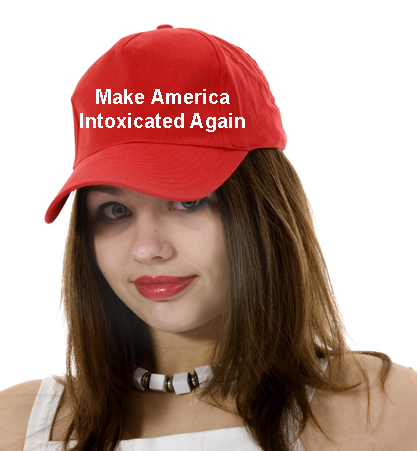 My fellow Americans, I am honored to run for president of these United States as the candidate of the We Party! This is HUUUGE! We are going to Make America Intoxicated Again! Intoxicated with Freedom! Intoxicated with Security! And Just Plain Intoxicated! We can all agree on that, can’t we?

driverless cars. We already have a lot of them on the road

now. Anybody drive here today? Did you look at the other

cars around you? With texters, makeup artists, and

breakfast eaters, we already have driverless cars! But we’re

going to make every car a safe, reliable, driverless car. Oh, I

really. But we’re going to put government money on the road

and create jobs. Lots of jobs. So many jobs you won’t

believe it. And, with driverless cars navigating the highways

and byways for us, we can get rid of those pesky open

As your president, I will solve the Aleppo problem. No one

knows Aleppo better than me. No one. Full of despicables

and deplorables. Aleppo is an acronym, you know. It stands

Obtuseness. Sad, very sad. We must bring knowledge to the third parties again. Particularly the Libertarians, because they want to legalize pot, which we support—because We Party!

Speaking of acronyms, I will ban them from the federal government. Ban them. No one hates acronyms more than I do. No one. They’re confusing and the antithesis of transparency. Did you know there are 10 different meanings for the acronym AA, including Any Agency? I. Kid. You. Not. Having 10 AA acronyms could drive someone to Alcoholics Anonymous in a driverless car. As your president, I will defund Alcoholics Anonymous. It’s a wasted program. Completely wasted. But I will increase funding for Planned Parenthood because of its obvious consequence of We Party!

I will outlaw gyms so no one ever has to exercise again! Gyms are an anti-American, socialist conspiracy. America doesn’t have an obesity epidemic! We have a success epidemic. America is the fattest nation in the world because we’re the richest. We have lots of food to eat, and we do, because Americans don’t want to waste it. Skinny people are losers. Losers! True Americans show their pride in our country by pigging out when We Party!

Speaking of American pride, NATO needs to be strengthened to protect western civilization’s right to We Party! Puny Putin is trying to exert his influence in the world. But he has tiny hands. Very tiny hands. And China continues to exert its military might. But while protecting American interests, we must be careful not to block vodka or egg rolls. Both are key ingredients when We Party!

But we will build a wall—and make Canada pay for it. Because as the great American Lewis Black said, Canada is where the cold comes from. Cold is important to beer. That’s why God invented refrigerators—to keep the cold contained. But we don’t want the cold to drift in and put a big damper on our backyard barbecues. (As your president, I will ensure you receive a tax credit for every new barbecue you buy. You can thank me later.) Now I can see some confusion in your faces. You thought we were going to build a wall along our southern border. Certainly not! That’s where tequila comes from. Building a southern wall would be the antithesis to We Party!

My fellow Americans, we live in sobering times. But we can Make America Intoxicated Again and eat, drink, and be merry. So vote for the We Party! I guarantee a new high for America!