This week, God revealed to me how humanity dawned on

Planet Earth, how global warming fits into God’s plan for

said Planet Earth, proof that the United States is God’s

chosen land, the identity of the little green men from

Planet Mars, and the true meaning of St. Patrick’s Day.

Not a bad week.

The revelations are important because hopefully they

will heal the rift among religious leaders over what is

most important to God: global warming or aborting

gays. Such Christian conservatives as Focus on the

Council’s Tony Perkins are upset that the National

Association of Evangelicals voted this week to reaffirm

its platform of priorities, which includes protecting

the environment. Dobson and Perkins wanted the

director for straying into such an ungodlike arena.

The association board didn’t even have the courtesy of acknowledging the conservative concerns.

Forgive them Lord, for they know not what they’re doing.

Here’s how God revealed it to me through the pages of our nation’s newspapers.

In the beginning, Mars’ southern pole contained enough ice to cover the entire planet in water 36 feet deep. Actually, that’s the condition today. And, as we all know, because we’re intelligent beings, water is the primary source of life. Where there’s 36 feet of water, there’s life. Or at least there was, because there’s evidence a lot of Martian ice melted over the millennia, possibly in concert with its core hardening and the subsequent loss of its magnetic field. But that’s just too much scientific mumbo jumbo and wild speculation. Let’s rely on the clarity of faith here.

Faith, as God revealed it to me, says the little green men who inhabited Mars long ago sensed the doom of their planet and sought another place in which to pursue life, liberty, and happiness. So they built a space ark with two of each of God’s universal creatures and flew to their neighboring planet.

No, not Jupiter. Earth.

The little green men (and women) were aiming for North America, which we’ll see in a moment is God’s chosen land, but they were drinking rather heavily in celebration of St. Patrick’s Day and wandered off course, landing in present-day Ireland. Hence, the leprechauns. Eventually some of the leprechauns grew and, at the dawn of mankind, became earthlings.

Now, lo and behold and begorra, St. Patrick came along (which is good, because they were already celebrating his day) and made the island homey for the little people by chasing away all the snakes. But in doing so, the land became hardened because God had put the slithering snakes there to aerate the fields. St. Patrick was not as bright as he looked. Soon there was no potato whiskey to be found and the Irish left for America.

And good thing for them, too, because the Martian leprechauns were making a mess of the rest of the world. In keeping with what they’d done on Mars, the ice was melting. And so it was that in the winter of 2006-2007, surface temperatures around the world were three times what they were in 1976—everywhere but in the United States, which recorded a rather average winter. God loves the Irish and has a soft spot for the U.S., too.

And so God begat Richard Branson, an Englishman who is genetically predisposed to hate the Irish, who offered $25 million to the human who could solve global warming. And weirdoes and whackos came up with pouring iron into the ocean, creating artificial trees to suck carbon dioxide out of the air, and building a solar umbrella between Earth and the sun, all in an attempt to undo what the Martian evildoers had wrought.

Which brings us from the beginning of time, as we know it, to today. I haven’t a clue what tomorrow will bring, or whether aborting gays is important. But I have faith God will reveal those answers in newspapers in the days to come.

Next week: Stonehenge and why God put us between a rock and a hard place. 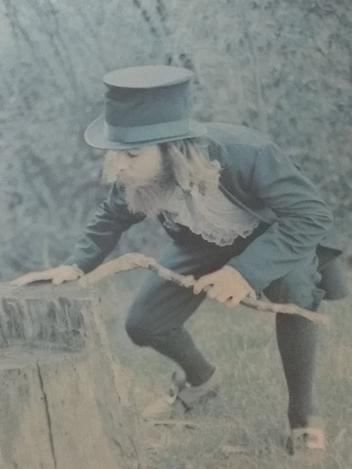