We’re Dealing with Many Storms. Stormy Daniels Shouldn't Be One of Them 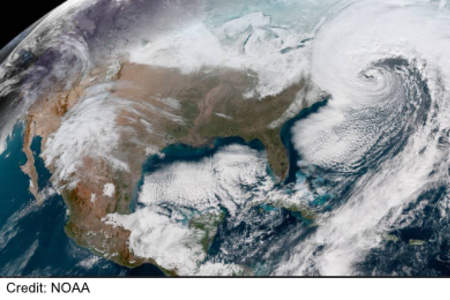 Is anyone else tired of Stormy Daniels and her weaselly attorney? She may have a legal case. But let it play out in the court of law. It doesn’t belong in the court of public opinion because it has no bearing on public matters. Oh, yeah, there is the matter of possible campaign violations, but the talking heads have stopped talking about that. I didn’t care about consensual sex between Monica Lewinsky and Bill Clinton and I don’t care about consensual sex between Daniels and Donald Trump.

We have real issues to discuss in America.

and others in power. Gun violence in our

The continuing divide between the rich and

Atlantic region of the United States, which

received its first major snow of the winter

on the first full day of spring, receive more

The fact that The Donald isn’t tweeting

about Stormy? Who gives a flying crap?

This week, the Trump administration expelled 60 Russian diplomats for the chemical attack in Great Britain. Trump has the highest turnover rate of high officials in recent history for presidents at this time in office. He unilaterally instituted tariffs on aluminum and steel and Chinese consumer goods, setting the stock market into a wild rollercoaster ride and upsetting overseas allies and U.S. economists.

The president is obsessed with building a wall along our border with Mexico—and doesn’t care who pays for it. His latest lame-brained idea is to have the military build it.

Other issues in the United States also are of more importance than Stormy’s love, um, sex life. The rise of intolerance. Continued racism and its resurgence in open society. Should I erase all my data from Facebook and Twitter? Is LinkedIn even safe?

Even sports controversies are more important than who is sleeping with whom. The Major League Baseball season kicks off today. It’s the earliest start ever and the first time all 30 teams were scheduled to play on opening day. What effect will that have on the players and the game, considering winter remains (see predictions of snow in the Mid-Atlantic in April, above). Will the Washington Nationals win the World Series—as Sports Illustrated predicted again this year? Or will they continue their trend of choking in the first round of the playoffs? Looking forward to fall, the National Football League on Tuesday changed its catch rule to try to minimize some stupid calls on the field. How will that affect the blood pressure of fans?

We have real issues to confront in this country. Whether Daniels was attracted to Trump when she had consensual sex with him isn’t one of them. Get over it and on with the real issues.